Mohamed l’Ghacham (1993) is a Mataró-based painter and muralist, born in Tanger (Morocco). Since his first contact with plastic arts through graffiti, he has moved into a style very influenced by classical painters and by the pictorical language of the Masters. Borrowing from Spanish Golden Age brownish palette’s and traditional composition, he has created his own language based on cotemporary muralism’s gestures, in an hybridation of technics that is rarely ever seen in street art. His characteristic visual imagery is focused on everydayness and detail, and has transformed him into an internationally recognized artist, with works in the United States, Italy and France. We talk to him about his big-scale and his studio work, about the importance of dialogue and respect when we intervene public space, and about the future paths of street art. (Photographs by Conor Gault) 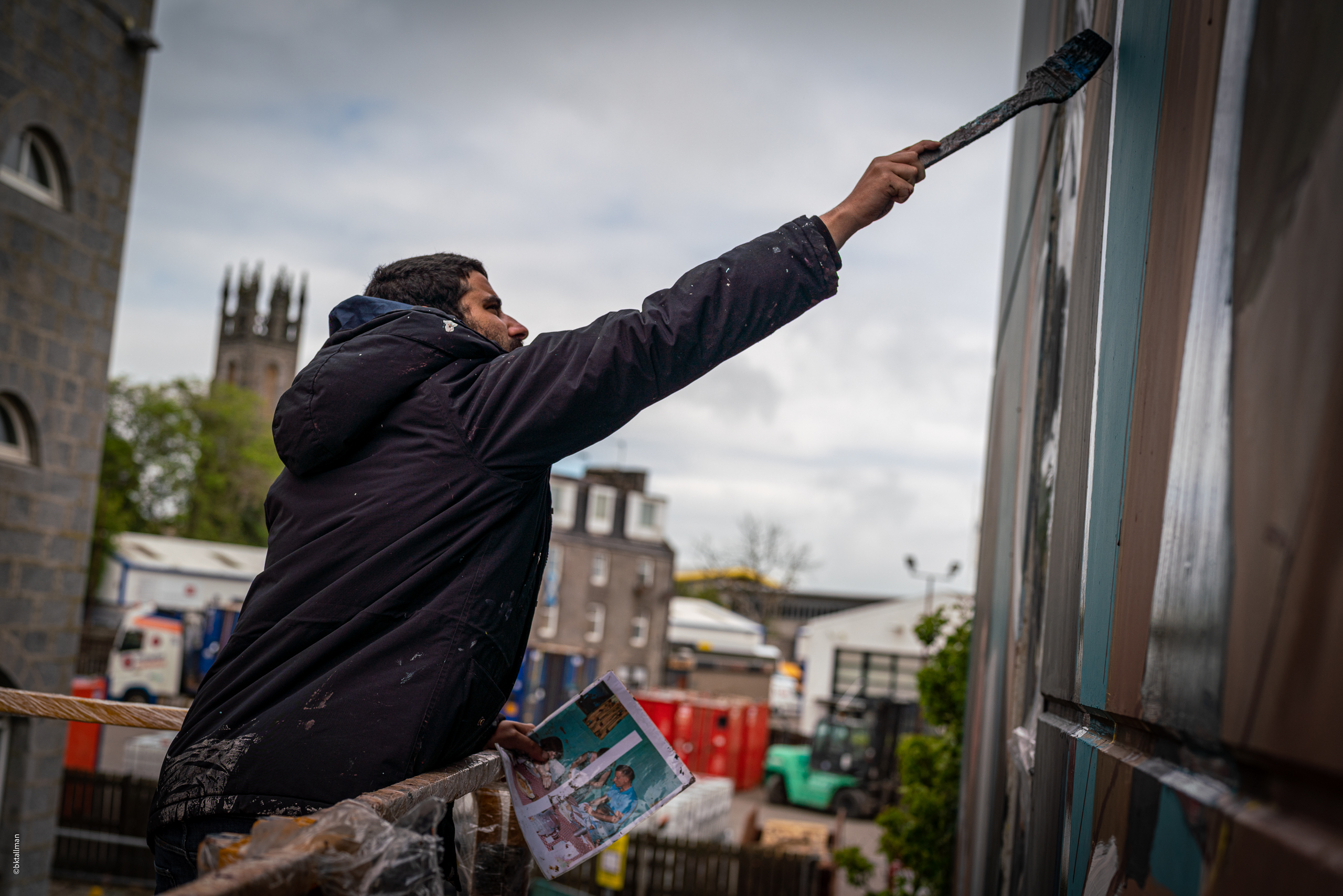 As a mural artist, you have intervened in very diverse public spaces using many formats. However, your style is recognized by the use of brownish colors that blur the boundary between the intervened wall and its surroundings, and the incorporation of human figures with a certain costumbrist air. That said, we could say that your aesthetic is close to a strict realism that is also reflected in your studio work. Could you explain a little how the workshop paintings dialogue with the murals in public space?

My work both in the studio and on the street starts from the same base and I generally try to have coherence both with what I do in the studio and on the wall. The main difference between one and the other I think is the environment. In the end, when you work in the workshop, you are making an isolated piece that will be seen hanging in a white environment, and that in my case generates added pressure on whether it will work well or not. While on the street, the environment itself and how your mural works in the landscape already gives you a certainty about where to head or not, and you can quickly see if the piece will work. As for the technical process, it is practically the same in both cases except for the material used. Although I try to emulate the oil appearance on the street, it is impossible to achieve the same pictorial richness with plastic paint. On the other hand, painting in the street with a very clear time limit gives me the possibility of simplifying and sacrificing everything that is not important for the final piece and being able to transfer that same way of working to the studio where the pieces are usually left to me. Studio works tend to take a long time and I tend to doubt much more about where to go. 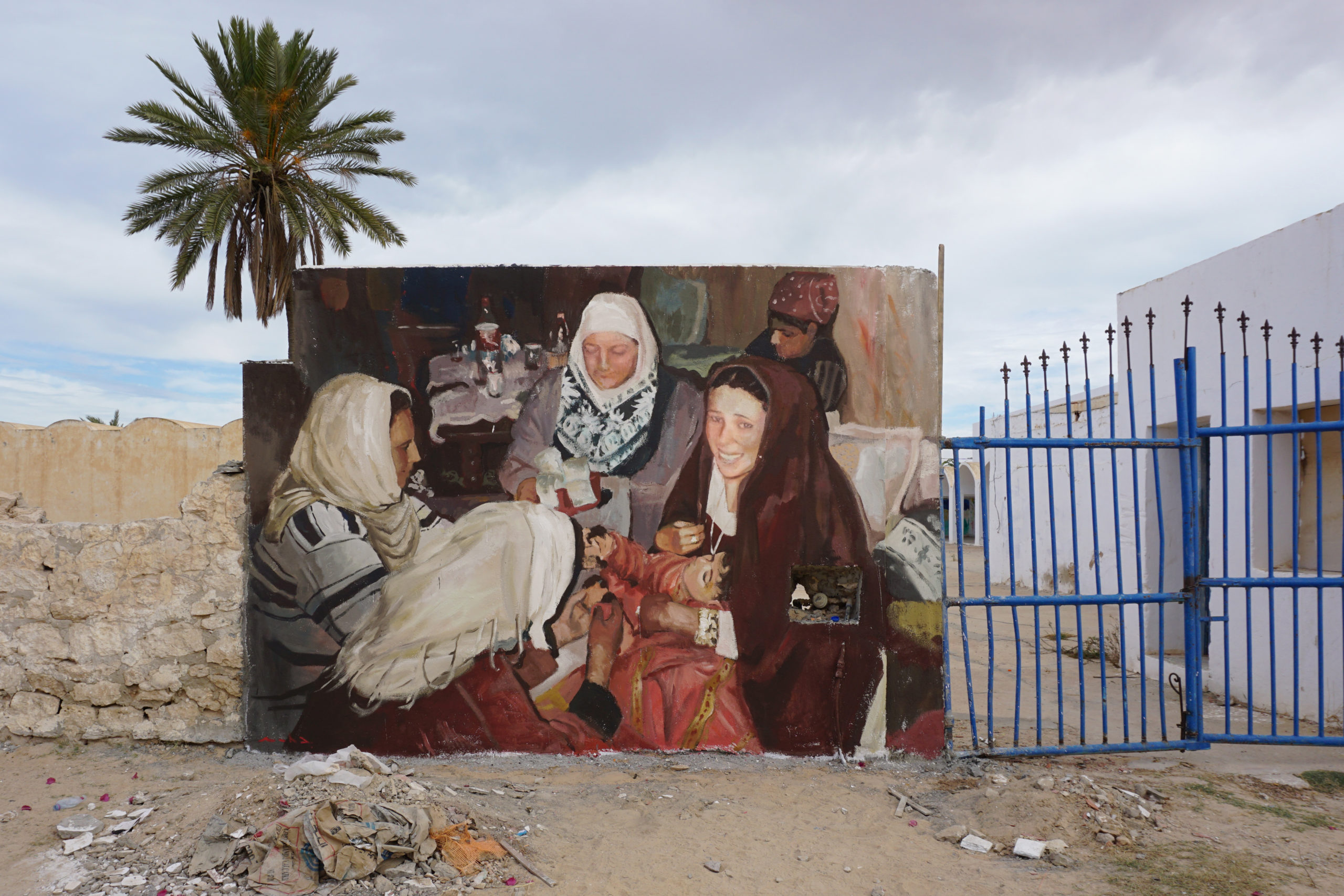 Recently, in March 2022, the murals of the Sant Andreu District project, produced by B- Murals Centre d’Art and Rebobinart, were inaugurated in Barcelona’s plaça d’en Xandri. In this project, you made murals that sought to make the elderly of Sant Andreu visible. How was the process of designing these murals and the collaboration with the other artists involved in the project?

For this mural, I started from Laura Abad’s interviews and photographs of the old people in the neighborhood. In the end, representing all those stories and people in one piece is not something that usually works, and less so in my type of work. Starting from the interviews, I decided to try to paint a scene that revolved around physical activity and social gatherings, beyond the typical image of serenity or rest which usually represents old people in murals and paintings. Being two identical canvases, I found it interesting to make a kind of loop of the same scene at two different times. I think that can unconsciously emphasize the feeling of activity and movement. As for the colors, I try not to be too aggressive and not to disturb the landscape and the city environment too much. Somehow, I try to contrast such large formats with colors that go unnoticed so that the impact on the environment is as respectful as possible.

As you mention, you collaborated closely with Laura Abad, who portrayed 12 elderly people from the neighborhood. How was this translation from a medium like photography to a large-format mural? What role does photography usually play in your creative process?

Laura’s photographs, being more of a studio work, did not fit much with my visual imagery or with the idea I had of the mural. But her photographs did serve as a base and to try different options. In my case photography is one more work tool such as a brush, I start from it to create my images, but I try not to be a slave. I use it more as a sketch and I add and remove things that work for me more than imitating photography pixel by pixel. The real challenge is to translate the language of photography into that of painting, sometimes with more success and others with less. 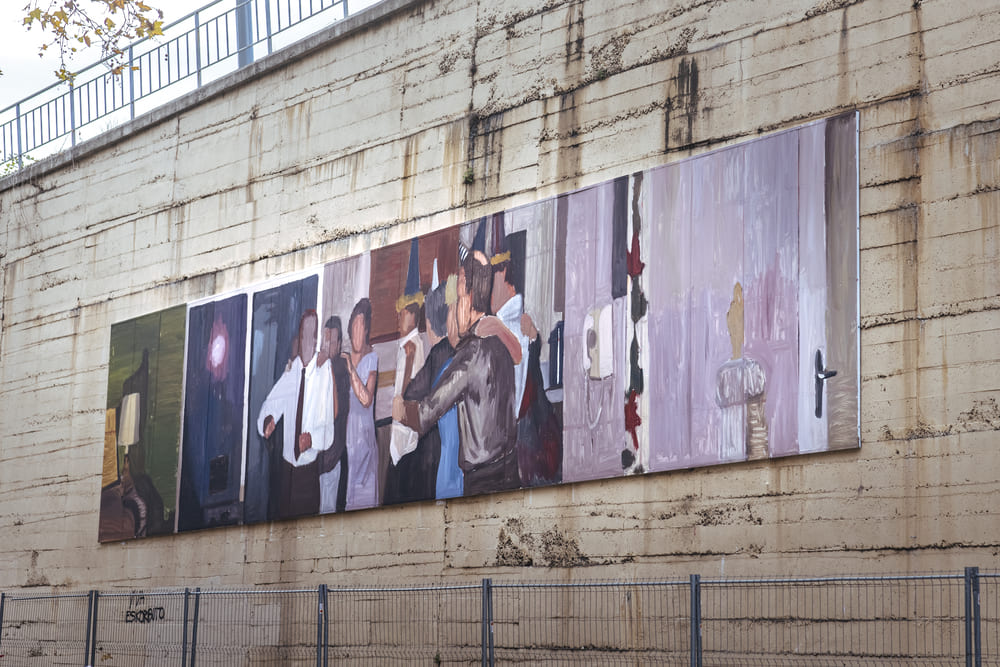 Your works convey a certain intimacy and everydayness that contrast with their size. Tell us a little about the challenges of working in large formats on a technical and artistic level.

The size of the walls is something that has a great impact and is very attractive for the general public in which I include myself, but I think that what is really difficult is to make something that has pictorial richness and that contributes something beyond just being an aesthetic element. In the end, there are many tools to adapt what you want in any format. In my case, I pay more attention to how a mural is painted than its size itself. For me the biggest challenge is usually time. In general, you have to solve a mural in five days or a week and many times the result does not depend solely on you: a good organization, good access to the wall, the welcome of the neighborhood, the weather, etc., have a lot to do with it. If those elements are not in harmony, they can greatly change your work experience and directly affect the result of your mural.

On a technical level, I have been active for several years and I have deeply internalized the steps and many times it is like a recipe that you know by heart and that depending on the context you vary to achieve the best result.

In my case, I start with a very simplified fit of the composition, I make a first color stain, getting as close as possible to the final colors to get an idea of how the mural works in the environment, then I redraw the entire mural to correct proportions. Then, I create the final composition, and I dedicate the last two days to finishing the details and seeing which first spots already work and which ones need more work. 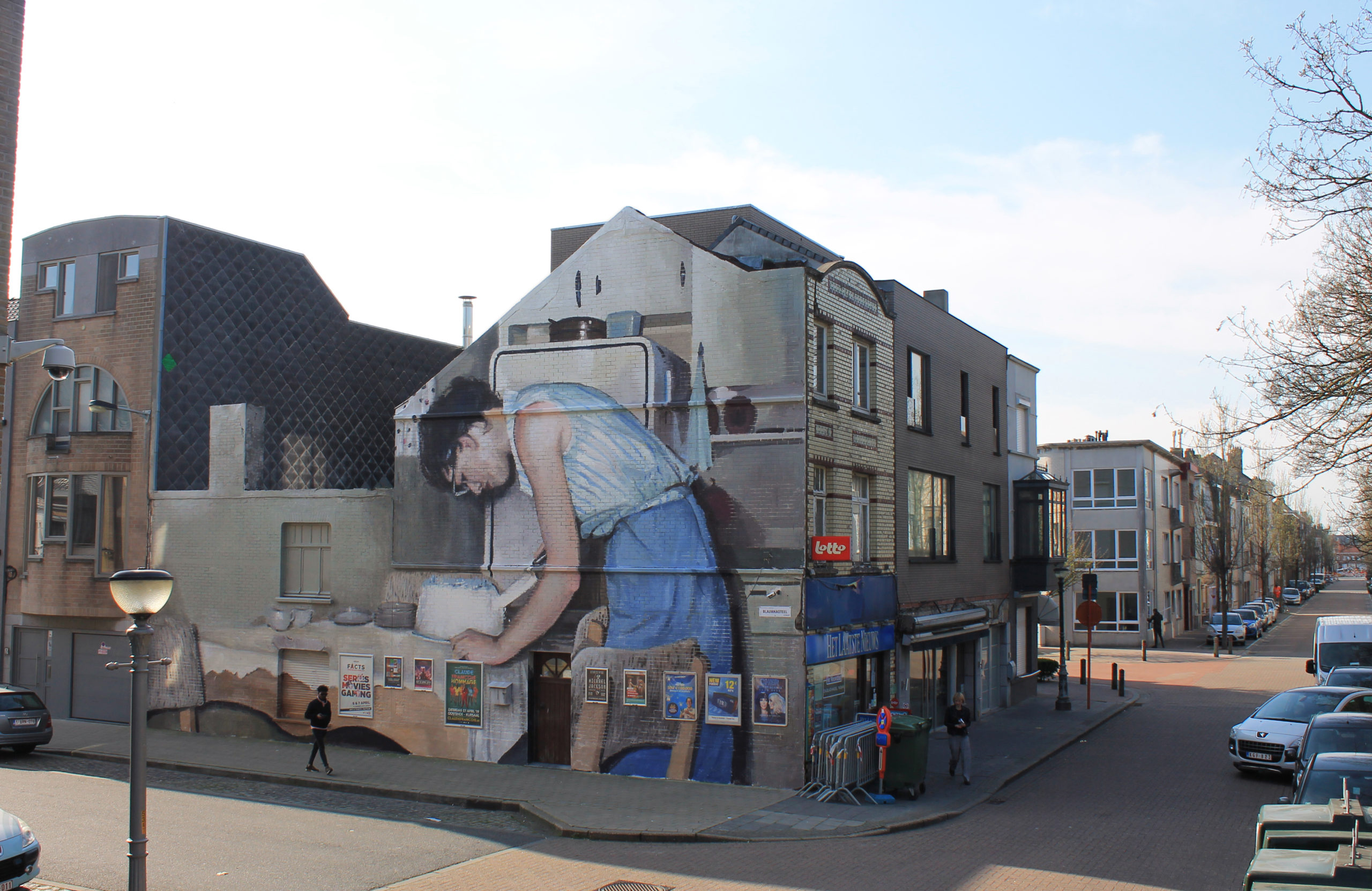 Following the thread of intimacy, which also dominates the ENACTIU project: What reaction do you think urban passers-by might provoke in encountering one of your works – calm and restless – amid their day-to-day journeys? In other words, do you think showing this intimacy is a political act?

I do not consider my work to be politically charged, or at least I do not intend it to be. In the end, street painting, apart from being a dialogue with the city, is a dialogue with the public. My intention is not to “educate” or impose my ideas on people who happen to come across one of my works. Enough imposition is to find yourself in front of a giant image, so to impose on top of that my ideas or political biases or whatever they are would be too much.

My intention has more to do with highlighting and giving importance to moments of everyday life that we normalize and lose perspective of their importance, rather than giving moral lessons or things like that. I like political muralism, but I think that to make murals of a political nature, the first step is precisely to be an activist. I think that many times certain topics are used to generate a stir or join a trend, but these political claims are really something with a background that goes beyond virality in social networks.

I consider myself a painter and, in my case, painting is the most important thing. The concept, discourse or theme is something that can accompany my work, but I am not necessarily worried about having an elaborated message or one with a social or political background. I prefer that everyone who sees it read it or interpret it as they want.

Finally, in your work you have mastered figurative and impressionist techniques, quite a challenge. Looking to the future, what challenges do you set for yourself as an artist? Do you want to share any current project? What frontiers would you like to push in contemporary street art?

Well, if I’m honest, I’ve been a bit lost for a couple of years. So now I am reviewing what I’ve done and trying to reinvent myself and look for other types of finishes. But it’s a long road and, although not in my life, in my work I consider myself a patient person. I suppose that little by little my painting will gradually blur and get simplified. In the end, I like the gesture that allows you to make a first stain more than the countless hours making details that, in my case, tend to become more decorations than substantial changes in the final result. As for projects, I have some murals in Europe before the end of the year and for next year the idea would be to try to exhibit studio works, but I still don’t know very well where to go.

As for urban art, I don’t know what to tell you… On the one hand, I think it’s in a very good moment where it’s relatively easy to get your chance and be able to paint large-format murals with good budgets and production value. But, on the other hand, the competition is much greater than when I started. With so much bombardment of murals on social networks it is easy to get lost and end up too contaminated with so many references and comparisons. 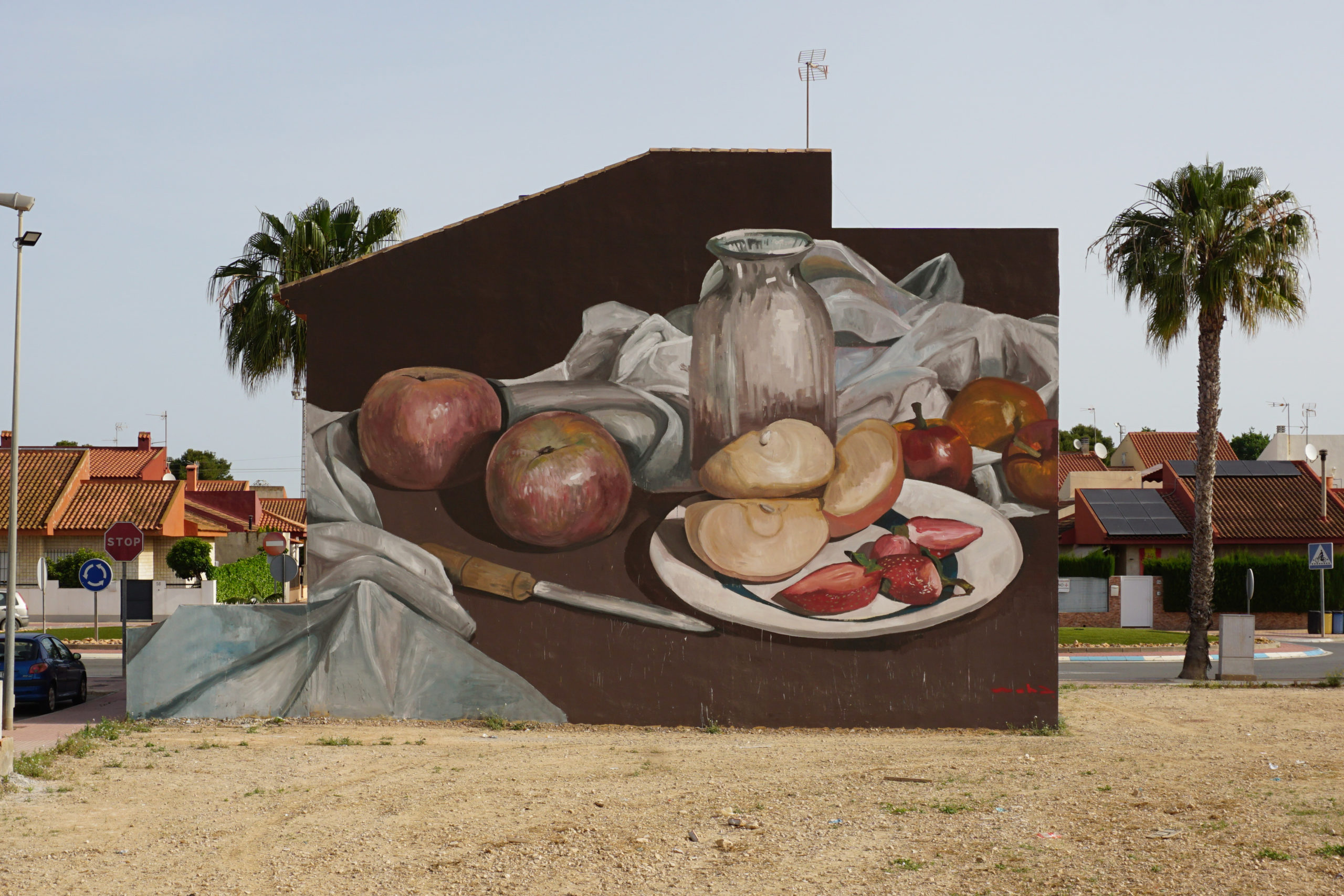 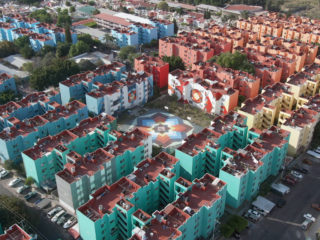