From the 8th to the 12th of June we were in Carrer Riera de la Creu (Hospitalet de Llobregat) doing a mural with the artist Slim Art. This is an initiative promoted by Aigües de Barcelona, ​​Aftershare and L’Hospitalet de Llobregat City Council within the framework of #RecuperemElsBarris, the aim of which is to recover the historical memory of the neighborhoods and cities in the metropolitan area of Barcelona.

On this occasion, the theme chosen has been the textile industry that was consolidated in this town during the twentieth century and that allowed the city to expand and prosper, laying the foundations of the evolution that would make it what it is today. On the other hand, these textile factories were composed mostly by women and, therefore, this action sought to make visible their work and their crucial role in economic transformation and of the textile industry and the city of L’Hospitalet de Llobregat, as the role they played is often omitted.

This way, Slim Art was in charge of making the mural that captured this piece of the city’s history and the reality of the women who worked in the textile factories during the last century. In order to put it into practice, the artist relied on a photograph in which women appeared spinning with industrial looms and different machines used in the textile production of factories, using their characteristic style. similar to oil painting using plastic paint and using sets of whites, blacks and grays to highlight this ancient photography effect. The result has been a work that fits perfectly with the aim of the project: to open a window into the past and recover fragments of the history of the neighborhood.

Finally, during the afternoon of July the 10th, the mural was inaugurated, an event chaired by Núria Marín (Mayor of L’Hospitalet de Llobregat) and Ignacio Escudero (Director General of Aigües de Barcelona) in which they invited to the citizens to gather, discover this new work and share this chapter of the history of the city. 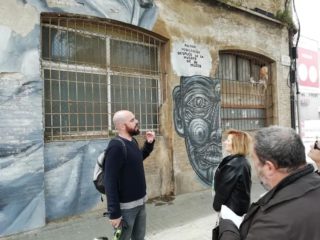 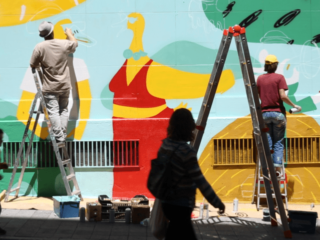