This weekend Wallspot closed the project to activate the first two free walls in the city. After two months of touring this municipal initiative, on January 23rd and 24th, both walls were intervened with the simultaneous participation of 56 urban artists, the vast majority from the Madrid scene. The two walls, one in the Moratalaz district and the other in Puente de Vallecas, have been covered with well-known pieces from the Madrid urban scene, at least until a permanent free wall system is activated.

In Moratalaz, the wall with the most influx during the two months of the project, the 160 meters long had a total of 27 interventions by artists selected through an open call. All the people who took part in this wall have been assiduous of the project and have taken advantage of the space that Wallspot offered on several occasions. Thus, the crew of artists who participated in Womart Madrid 2020 repeated the experience (Shara Limone, Its Mancho, Iris Draws Stuff, Savelga, Rubix, Ele Zissou, Elisabeth Karin, Miss M. Smith, Mrs. D and Ana Dévora), as well as other artists from the city linked to graffiti and urban art scene (Risketto, Gerbos, Drogoff, Creto, Willy Boy, Jueves, Alice Mazzili or Korbe). As always when interventions occur in this space, the neighborhood and photographers who are fond of urban art come closer. The experience with this space is unanimous: it has been positive, it improves the environment of a street that is already long and lonely and it would be positive if the experience continues.

The high walls of the Puente de Vallecas wall gave the artists headaches. The water leaked from the drains of the bridge itself after the rain of these recent days. With a lot of ingenuity, patience and adaptation, it was possible to intervene for the last time in this complex space, with high walls which are not always easily accessible. On the one hand, 19 artists intervened on the south wall with a collaborative mural of characters and dolls. On the other, ten renowned graffiti artists produced a complex piece in homage to the neighborhood: a giant pirate who defends Vallecas from monsters and fearsome creatures. The mural, in collaboration with the Bukaneros, is a nod to the tough neighborhood soccer team, Rayo Vallecano.

On the south wall, intervened with Montana Colors paint, nearly twenty Kekos shake hands. The collaborative piece is a compilation of some of the most recognizable characters and styles on the city’s walls: Fatuo Fantasma, El Rey de la Ruina, Antoñito, Krasy, Pyramid Eye, Grid, Humo, Coni, Larry, Marta Tuuk, Glossy or Chincheta, among others.

On the north wall, reserved for a collaboration with painting provided by Writers Madrid, an ambitious mural with a 100% Vallecano spirit turned out. A great pirate of more than 25 square meters of surface and great technical detail crosses his sword with that of several fearsome creatures at the other end of the wall. On the swords, five pieces of classic graffiti from the city’s most renowned writers. The participation of the Bukaneros leaves the stamp of a large shield of the emblematic local soccer team. Great intervention for a difficult wall that had always been gray and a great contribution to that corner of the neighborhood, dark and humid, but now also with a very special touch.

Last weekend’s performance closes a unique initiative in the capital and the testing of two free walls for the first time in Madrid. Thanks to all the people who have made the project possible, to the more than 200 participants, to whom you have shared photos and to the people who have worked behind the visible and artistic part of the project to make it viable and to the Public Art area of ​​the General Directorate of Cultural Heritage of the Culture, Tourism and Sports Area of ​​the City Council. We’ll see you on the streets! 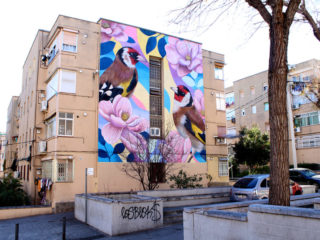 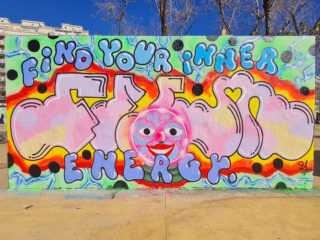