Last December, the artist Irene López León painted a community mural in l’Hospitalet de Llobregat. The project, framed within the comprehensive Plan Les Planes-Bloques la Florida, has been an initiative of l’Hospitalet City Council, and Rebobinart has been in charge of its production.

This initiative aims to empower various groups in the city through art, and this time it has focused on aviculture, to give visibility to the group of bird lovers in the city and at the same time promote coexistence using urban art as a tool for social transformation and public space.

During the first phase of the project, the artist documented the presence of aviculture in the city of l’Hospitalet through various voices from the neighborhood. Based on these contributions, Irene López León designed a visual composition that reflects on the presence of birds in the territory, always adding new value to its urban environment.

In the final mural, which has been painted in one of the blocks in the Plaza de la Florida, two male birds of the goldfinch species (Carduelis carduelis) can be seen represented, accompanied by a floral background with bright colors that highlight the urban outline. The final composition, drawn with the artist’s own realistic style, thus reinforces the importance of giving value to fauna and flora through a close look at poultry farming.

It should be noted the warming welcome that the project has obtained among the residents of the neighborhood, many of them passionate about birds. In addition, the neighborhood, thanks to the Las Planes – Bloques La Florida Comprehensive Plan, already has several large-format murals on various facades, such as the Mural of Women by the artist B-TOY, the Mural for the Elderly by Elisa Capdevila or the Mural de la Música at CEIP Pau Vila by the artist Kamil Escruela. All of them have been developed through participatory and community processes with different groups in the area. 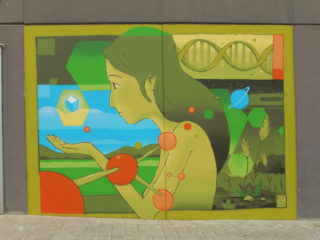