This November the exhibition of “Banksy the Art of Protest” was inaugurated at the Design Museum of Barcelona and Rebobinart had the chance to present its project #ArtalTram there.

The artist and illustrator Javirroyo was the one in charge to develop the third action framed in #ArtalTram. He as Banksy uses the sarcasm and irony to talk about the current affairs with critic and original manners. The large-format intervention took place in the corridor of the Design Hub of Barcelona, thereby generating a space to immerse in art and culture where the spectator could have an introduction of a critical point of view of Banksy, before heading to the main exhibition.

The artwork of Javirroyo was presented with different illustrations where he pretended to show a critic spirit with some comic connotations of the actual society with examples like the current art market, new technologies or the different methods of consumerism. The main subjects of the vignettes represented in the wall were a combination between the well-known subjects of Banksy like the rats, the soldier, the girl with the balloon, and its personal iconographic subjects.

The artist also took the opportunity to represent scenes related to the #ArtalTram project and the Tram stations of Cornella Centre and Besos, intervened by MurOne and Amaia Arrazola. The art performance that he did was happening simultaneously with a displayed audiovisual content of Art al Tram, a project which had different artistic interventions which had the aim to empower the social and environmental issues and values approaching to the citizens an idea of a city based with sustainability, social innovation and inclusion using art and culture. 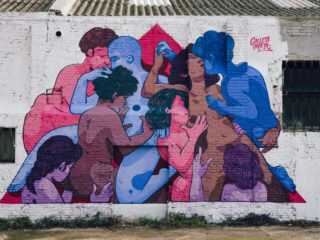 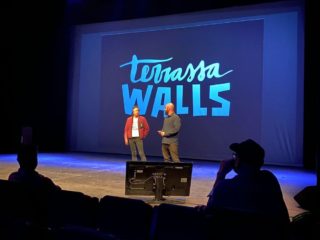