From Rebobinart, together with TRAM, we have produced the second edition of Art al TRAM.

This time the artistic intervention has been carried out at the Tram Besòs stop and the artist in charge of executing the mural has been Amaia Arrazola.

With more than 900m² of work ahead of them, Amaia Arrazola and her team formed by Santiago Jaén, Edjinn, and Jaume Molera, got down to work to transform both sides of the station. After two weeks of work, the stop has become a piece of art. On one side, the artist has captured various characters with egalitarian, sustainable, and inclusive attitudes, which show the diversity of TRAM users. These aspects are part of the city of Barcelona, ​​that is why TRAM has wanted to represent this enriching philosophy in one of its stations. On the other side, we find several species of birds that inhabit the Besòs area such as the hoopoe or the European turtle dove. With this mural, Amaia Arrazola has managed to oxygenate the platform, connecting the exterior with the interior and showing this modern, globalized, and inclusive city that is Barcelona.

Art al TRAM began in 2020 with the execution of Iker Muro’s work at the Cornellà Centre station of more than 1,600 m². The works included in this project revitalize the stations and turn them into friendlier spaces, while providing a cultural interest to the area, within the reach of all citizens. In addition, TRAM aims to reinforce social and environmental values ​​by bringing citizens a model of a city based on sustainability, social innovation, and inclusion through art and culture.

From Rebobinart we are very satisfied with the result, and we hope to continue advancing with this project. 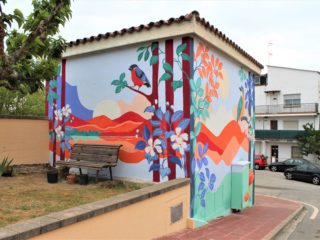 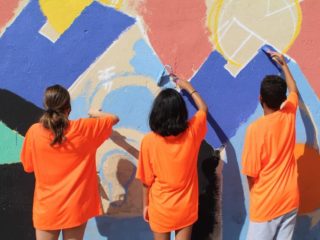