The new urban art mural at the Cornellà Centre TRAM stop has been officially inaugurated with a visit in which the Cornellà Mayor, Antoni Balmón, the Minister of Sustainability and Territory, Damià Calvet, and TRAM’s president, Felip Puig, among others, have participated. For two weeks, Iker Muro, also known by his artistic name Mur0ne, has performed an artistic mural of 1.635m2 inside the Cornellà Centre TRAM stop in Cornellà de Llobregat (Barcelona). This artwork, managed by the cultural entity Rebobinart, has been the first action within Art al TRAM, a project to promote quality art interventions at several stops that TRAM aims to activate over the upcoming years.

Through this project, they want to use art to revitalise these spaces and make them more pleasant. Moreover, TRAM is focusing on social and environmental values, bringing to the people a city model based on sustainability, social innovation and inclusion through art and culture. Located at street level in one of the most central parts of Cornellà de Llobregat, the Cornellà Centre TRAM stop has become a common walking area. As such, TRAM has chosen this benchmark station in the Barcelona metropolitan area to kick off the project.

Mur0ne’s figurative artistic intervention, composed by bright colours, depicts multiculturality and diversity among tram riders with a play on overlapping profiles that generate a sense of movement. The artwork, integrated in both sides of the TRAM station at Cornellà Centre, has endowed with vitality the stop creating an immersive artistic experience both for the transport users and daily pedestrians.

This is the second remodelling project of the Cornellà exchanger since the 2005 when “Trayectos” project was inaugurated in which students from the Faculty of Fine Arts of the University of Barcelona participated, coordinated by professors Albert Valera, Lluis Doñate and Maria Josep Forcadell. The project conceived the TRAM stop at Cornellà Center as a sculptural space where different elements – graphic and three-dimensional images, signs, texts and areas of colour- manifested the idea of travel and transportation.

Previous remodelling of the space

Before starting the mural, TRAM completed significant works to refurbish the lighting at the Cornellà Centre intermodal station, to improve visibility of Mur0ne’s work and reduce power use, replacing the existing lights with low-consumption LEDs.

Iker Muro is a Spanish artist and graphic designer who has been making murals in Spain and abroad since 2002. His work combines figurative and abstract art, conveying both tangible and fictional elements through vivid colours and figures influenced by the visual imagery in the cities where the artist paints.

Rebobinart is the cultural platform that is managing and producing the mural. Since it was founded in 2012, this organisation has had a clearly social philosophy of putting urban art at the service of social and cultural dynamisation of public spaces. They work to promote the most elaborate expressions of urban art and de-stigmatise the perception of an art form that is often considered vandalism and invasive. This is why they foster a professional take on urban art, helping it serve society by creating projects rooted in the area, that add value to the urban space and give residents a greater sense of belonging to their neighbourhood or district, bringing about a culture of participation and critical thinking.

TRAM, the public transport company that manages the two tram networks in the Barcelona Metropolitan Area, has supported culture for some time now through collaborations with cultural organisations such as Gran Teatre del Liceu, the museums in the Articket network and local organisations in the cities the tram networks travel through. The project in Cornellà Centre further extends this line of collaborations, brining cultural expression to the people. 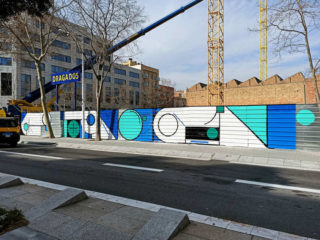 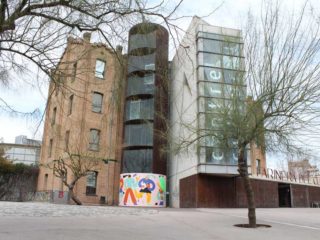