On June 14 and 16 we were conducting an urban art workshop with young people from the Center Socioeducatiu del Poblenou.

Pepasso was the artist in charge of developing the workshop, which lasted two sessions. The boys and girls of the center were working on the theme of housing and gentrification, that is why the artist proposed a design from which they would work on these aspects.

Over two afternoons, the young people were discovering and practicing various techniques that are used in urban art such as spray and plastic paint. They painted the mural on the outside of the wall in the center, in which you can see a turtle defending its house, which it carries in its shell, in a city where housing is exclusive for those who have a large capital. Through this design, the artist was able to transmit the values ​​that the boys and girls had been working with, in a very close and affordable way.

The Poblenou Socio-educational Center works so that children, young people, and families of the neighborhood develop at a human, emotional, and competence level in their life process. From Rebobinart we are very happy to have been able to work with this entity that promotes the well-being of the residents of Poblenou and to be able to contribute a mural work with such a valuable background in the neighborhood. That is why we want to thank the workers of the center for having given us this opportunity, the good predisposition and professionalism of the artist, and the energy and good humor of the young people when conducting the workshop. 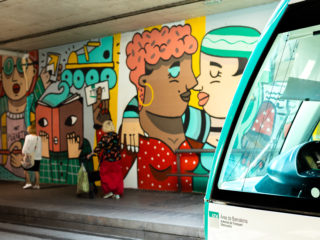 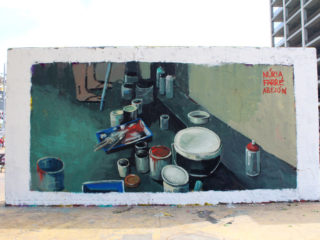