Rebobinart and TRAM have already executed the fifth edition of the Art al TRAM project at the Sant Martí de Provençals stop on Trambesòs (lines T5 and T6), by Elisa Capdevila. For a whole month, this artist from Barcelona has depicted various tram users with their different bodies, forms of dress, lifestyles, ethnicities, ages and moods. The mural, therefore, pays homage to the citizens and at the same time invites curiosity and observation in a transit area, an activity that is becoming less and less frequent in large cities.

On one of the walls, characters up to 3 metres high form a collage of scenes with couples, people resting, reading, walking the dog, children laughing, people with reduced mobility or on bicycles. And on the other side, the work plays with the windows as if they were showcases in which objects are displayed that may or may not be related to the characters in front of them, as if it were a game.

The Catalan artist Elisa Capdevila studied painting and drawing at the Barcelona Academy of Arts and gradually transferred her work to the walls, eventually creating large-scale projects, which has led to her international renown. He has participated in several urban art festivals and currently combines her mural work with studio work.

Art al TRAM is a project of artistic interventions curated by urban art entity Rebobinart with the aim of using art to revitalise transit spaces in tram facilities and make them more friendly places, as well as generating unique experiences for passengers.

The initiative began in 2020 with the execution of the work by Iker Muro (Mur0ne) at the Cornellà Centre stop, where over 1600m² the multiculturalism and diversity of the tram’s users is represented through a set of intersecting face profiles that generate a sensation of movement.

It continued in 2021 with the mural intervention by Amaia Arrazola at the  Besòs stop, where inclusive, diverse, contemporary and metaphorical characters share space with giant birds native to the Besòs area. The latest Art on the TRAM projects were carried out by the French artist  Perrine Honoré and the Basque illustrator Javirroyo. Perrine intervened in the  TRAM offices in Barcelona with a mural evoking a sensory tram journey and, with Javirroyo, TRAM took part in the exhibition “Banksy. The art of protest” at Disseny Hub Barcelona, where the illustrator explained the relationship between the Art in TRAM project and the graffiti artist Banksy. 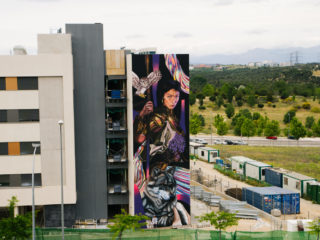