Ekosaurio takes over the third edition of Waterwall

During the last week of September, the Puerto Rican artist Ekosaurio intervened the walls of the water treatment plant in Sant Joan Despí, thanks to the collaboration of Aigües de Barcelona, the Council of Adolescents and Correspondents of the municipality and Rebobinart.

The Waterwall project has been reactivated three years after its last edition to rehabilitate one of the areas of Aigües de Barcelona’s assets that had been vandalised with illegal graffiti. Waterwall pursues the mission of making a city with a new initiative of participative and cooperative intervention between various collectives and inhabitants of the territory in question, maintaining art as a working tool and water – treated as a source of life and biodiversity – as the thematic axis.

How was it implemented? In two phases: the first with a clear pedagogical approach in which a participatory session was organised to contextualise the young participants in the municipality, and the second in which the artist and the neighbourhood executed the work together.

In the first session we wanted to bring the educational network closer to the values of sustainability and the responsible use of water through artistic expression, as well as a voting process to choose the winning mural design. In this case, Ekosaurio’s design.

Thus, the second phase based on the execution of the mural was conducted by the artist himself and a Rebobinart production assistant, Albert Penado. From 26 to 30 September, the walls of the Sant Joan Despí water treatment plant were painted in a very personal style: the representation of natural flora and vibrant vegetation that reclaims its space in search of a new identity.

The first action of the Waterwall project took place at the Dipòsit del Pomar, in Badalona, in 2018, and involved the artist Spogo and a group of young volunteers from Espai Jove Supernova and Espai Jove Morera. A year later, at the gates of the Sant Pere Màrtir depot, the artists Núria Toll and Gemma Fontanals intervened jointly, with the participation of students from the Escola Municipal d’Art d’Esplugues de Llobregat. 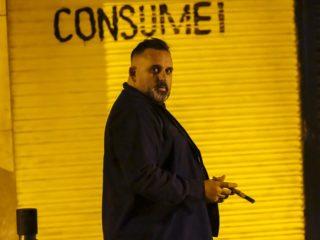 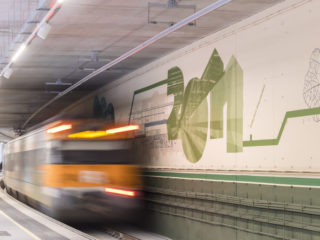