The Wall Lab La Model was held on 8 and 9 October on the walls of Rosselló street with the participation of the artists Gemma Fontanals, Pep Walls, Noble and Pol Pintó. This action was part of the repertoire of activities carried out during the months of September, October and November to celebrate Rebobinart’s 10th anniversary.

This Wall Lab, promoted by Wallspot and produced by Rebobinart, took place on the walls of the Roselló street of the former prison of Barcelona: a space that accumulates stories and memories inseparable from the collective imaginary of the city. However, for Rebobinart it was the core of the last edition of the Ús Barcelona festival (2018) and, this year, the stage for reflecting on the 10 years of the organisation and on the conflicts and tensions between urban art, public space and the agents involved.

This intervention is yet another attempt, over the last few years, to re-signify this space and to adapt it to the new needs of the neighbourhood and revitalise it. To this end, four artists have been chosen to intervene with four free theme designs’, each of them taking us into their own unique and non-transferable world:

Gemma Fontanals explores with shapes and colours, capturing, through her characteristic female characters, love itself and the enjoyment of it. As the artist says, the piece “celebrates the company, the conversations, the vermouth and the after-dinner conversation. Represents the idea of ‘being there’, telling and hearing the same stories over and over again with a glass in hand and a handful of peanuts. To be able to claim it from a public and permanent place, enveloping a building marked by isolation, seems very important to me, and I feel very grateful”.

Pep Walls, through a naïve and illustrative style has created a mural piece entitled “Plastic Col·lapse” full of sarcasm that conceptually, and forming part of his artistic symbology, deals with the concern about an imminent social and environmental collapse from a destructive and anti-system point of view.

Noble gives us a piece inspired by characters and lettering from the world of comics and sends us a clear message: life is short and it is better to live in the present, without fakeness.

Pol Pintó paints one of the walls of La Model with his abstract and geometric style using a meticulous technique: with a piece of string, he traces, with light and quick touches, a composition of lines that together compose a unique trace.

It was a very intense and satisfying day, both for the artists involved and for the people of the neighbourhood, as it was an opportunity to weave links between professionals in the sector and also with the public. Neighbours stopped to contemplate the artistic process and took the opportunity to talk about the murals with the authors themselves and share experiences inevitably marked by the coexistence with the old prison.

Wall Lab aims to be an initiative with an impact for the city’s resident artists, as it aims to offer spaces to execute works that will last from half a year to a year and to provide spaces where they can develop their artistic projects and gain visibility, while at the same time is contibuting to the professionalisation of urban art.

This Wall Lab has been made possible thanks to the collaboration of Ajuntament de Barcelona, ​​Generalitat de Catalunya and Montana Colors. 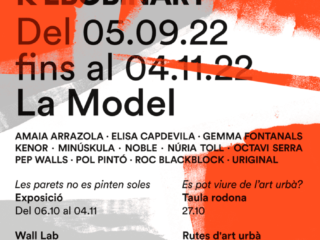 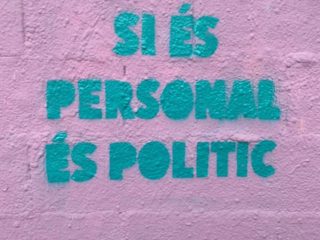