At the beginning of November, the last edition of Wall Lab was celebrated.

Between all the people registered to the call only four artists had the chance to display their art work in medium-format wall, located in Poblenou, Barcelona (passatge de la Llacuna 22).

The chosen artists were Carola Bagnato, illustrator and muralist from Argentina; Dirty, originally from l’Hospitalet, ex-graphic designer who decided to focus 100% to his art; Galleta Maria, artist from Valencia specialized in design and illustration; and Pol Pintó, local artist, whose work is based in the movement.

The new mural in Poblenou intended for Wall Lab was filled with the four art pieces free-themed, the one of Carola Bagnato where we can find a subject who explores next to its lead animal; a tribute to love and the different ways of caring of Galleta Maria; the abstraction of Pol Pintó captured on the two triangles that complement each other, made with a string line; and the colorful world in which Dirty embody its characteristics subjects.

Wall Lab is an artistic program which has de aim to make visible al the talented artists residents in Barcelona and at the same time promoting the professionalization of Street Art in the city. This edition was culminated with a process and results very satisfactory, what help to create bonding between the artists and revitalize the urban space where the intervention took place. We would like to thank once again the collaboration of Montana Colors and Districte del Poblenou whom believed and gave the space for this artistic and cultural project to be developed. 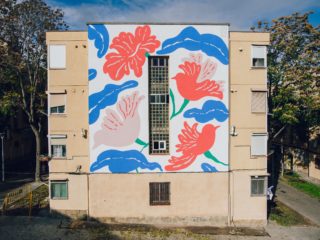 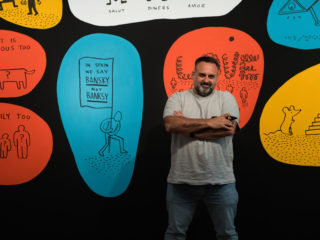