In May 2022, three days around urban artistic practices were held at the Italian Lyceum Edoardo Amaldi in Barcelona with the dynamization of educators from Rebobinart and the collaboration of the artist and illustrator Maga. The objective of these sessions was to promote the participation of the students in the appropriation of the institute’s own space, giving them not only the agency to decide on the design of the artistic intervention in a legal wall managed by Rebobinart, but also providing them with the tools to critically reflect on the urban environment they inhabit and strategies to transform it.

In the first session, Marc García, founder and director of Rebobinart, carried out an urban art route through the Poblenou neighborhood so that the students could learn in situ the values ​​of the entity’s urban art projects with examples located in their more near. The route led to dialogue on the concepts of responsibility, citizenship, respect and social inequalities in everyday life. Once these issues were problematized, it was raised how urban art can lead to new city models based on social empowerment.

In a second session facilitated by the urban artist Maga, the group of students brainstormed to choose the theme of the mural – due to its revolutionary nature, Italian Romanticism was chosen as the theme. Specifically, the group decided to pay homage to the Italian poet and philosopher Giacomo Leopardi (1798 – 1837) whose poetry transmits the sensation of the sublime that the human being has before the infinite. Based on this theme, Maga worked on the iconography and design of the mural, appropriating characteristic compositions of Friedrich’s pictorial romanticism and hybridizing them with A. Ferrazzi’s portrait of the poet, made in 1820 and which is still preserved in the House-Museum Leopardi in Recanti. Finally, the third session was dedicated to the joint production of the mural on the lyceum’s wall, where the students were able to experiment with the graffiti technique observed during the urban art route.

You can visit the docummentary made by RTVE’s “Punts de vista”, at 14:38 to see the live production of the wall art. 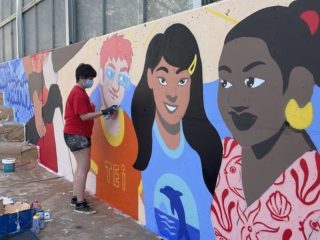