On May 19, the artist Maga visited the Institut Front Marítim, located at the Sant Martí district of Poblenou, to carry out an artistic intervention on an exterior wall of 11.6 square meters in collaboration with a group of students from the center. The action gives continuity to the institute’s TEI (peer tutoring) project, which promotes peer training through dialogue between students from different courses, establishing third-year students as tutors for first-year students. The center is a pioneer in this project and complements it with peer-to-peer conflict mediation dynamics with fourth-year students. From these practices, the will arose to make physically visible the values ​​that both projects allow to cultivate – cooperation, companionship, mediation and respect. For this reason, artistic intervention was proposed as another way of exploring these values, through a visual expression made with the students themselves. Through the creative workshop, Maga was able to develop artistic training strategies beyond the classroom with fifteen students who were taking the visual and plastic elective in 4th year of ESO.

During an intensive day of work, the students carried out a collaborative creative process with the artist Maga in which they defined the theme, designed the mural and carried out the intervention on the wall, located in the school’s courtyard. Through dialogue, the students defined a theme from a brainstorm that revolved around the concepts of coexistence, companionship and cooperation, central to both projects, TEI and mediation. These were translated into visual elements such as the hug, shaking hands, the moment of the game, as well as the sea, the wave and marine elements that characterize the Institut Front Marítim and situate it in the Poblenou neighborhood. The result was a collective mural that combined the lettering of “Front Marítim” that territorializes the work in its local area, with school elements and soccer and basketball balls that integrated it into the playful space of the high school courtyard. Next to it, the image of four holding hands forming a square as a symbol of cooperation was complemented by the illustration of three people backing each other up. These people and the prints on their clothing made it possible to incorporate other elements that the students had identified as central: diversity, the need to explain the initials of the TEI project, and to insist on marine elements as an appropriation of these values ​​from Front Marítim. 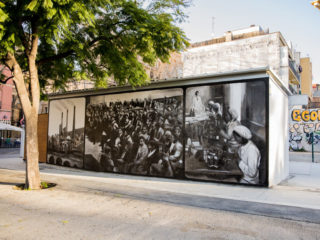