On May 27, 2022, the French illustrator and muralist Perrine Honoré conducted a street art workshop at the center of non-guarded migrant minors at Hostalets de Pierola. Honoré worked with a group of minors during two intensive sessions in which they developed and executed the design of the artistic intervention of a wall of the village.

Since its opening in summer of 2020, the non -guarded migrant minors center located in Can Gras has fought for not being an isolated transit space for all citizens. On the contrary, before its inauguration, information sessions have already been carried out with the entities involved to promote dialogue with the neighborhood, prioritizing the welfare of minors. The involvement of the center’s residents with local environment was central to Honoré’s workshop. The intervention of a space where they could express their feelings and aspirations was an exercise of appropriation of the neighborhood through creation. In addition, the beautification of the wall invites the neighbors to approach it and to recognize it as well.

In the first session, Perrine Honoré shared her history and her creative process with the group, which then carried out a dynamic of creation and rain of ideas where the central elements of the mural have already appeared. Concern about climate change, the desire for freedom, the memory of a bicycle and an island landscape… These elements were collected by Honoré, who reflected in a mural design where her artist’s brand is appreciated with the festive and colorful aesthetics her.

In the second session, the minors and the artist jointly painted the mural, a collective action of public space intervention that made visible concerns of the young migrants who are often hidden. While it is true that in the cases of non -protected minors the coverage of vital needs such as food and housing is privileged, the urban art workshop allowed young people to explore their artistic concerns that are often considered secondary but that have the potential to trigger public reflections on their own identity and their role in the community. 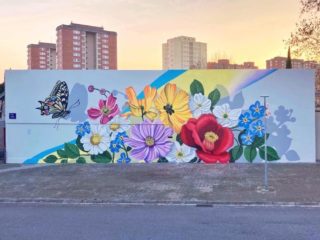 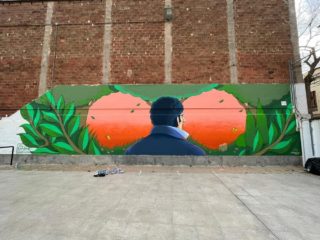