Last Sunday June 19 we celebrated, in the Parc de les Tres Xemeneies, the LGTBIQ+ JAM Wallspot in the framework of Pride. From Rebobinart we promote activities like this to support talent in urban art, to make visible sexual and gender diversity, to promote equality within the urban art sector and the need to create spaces of denunciation in the artistic field. During the day, with music and Stone Brewing, ten artistic murals were made to vindicate the elderly within the collective.

For this occasion, nine artists painted the walls under the slogan: “We are LGTBIQ+ seniors and we are not invisible”. This slogan, along with others, was proposed by the Association Grup d’Amics Gais (GAG), an association that works for social recognition, legal advice and support for lesbian, gay, trans, bisexual and intersex people who collaborated with us on this day of JAM.

The seven artists selected under the curatorship of the two Guest Artists of Wallspot: Pabs and Galletamaria were: Ale Poiré, Fractal Tattoo, Pixapixa, Marcel Serrano, Luluaces, 2304 and Demut, all of them, from their styles and languages, captured on the walls the importance of the elders in the fight for LGTBIQ+ rights. During the day, there was also a collaborative mural with the passers-by, which was animated by the Deseo.

Pabs wanted to show the diversity of sex-affective situations in which older people can be: as a couple, alone, etc. and the mural was presided over by the phrase: Love has no age”. In turn, Fractal Tattoo made its mural with its characteristic style focused on typography, where, with shapes reminiscent of breasts or the figure of infinity, it read: “we are not invisible, we are here”. For her part, Mexican artist Ale Poiré paid tribute to singer Chavela Vargas: “what better reference than her for opening the way for many in times that were much more difficult”, explains the artist.

Joining the Orgullosa Barcelona program that the City Council is promoting during the month of June, from Rebobinart we intend to turn the LGTBIQ+ JAM into a loudspeaker of struggle and celebration where everyone can feel recognized and where spaces for critical dialogue and collective empowerment are generated through artistic creation in public space. 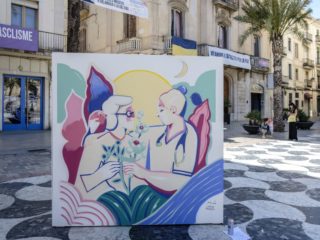 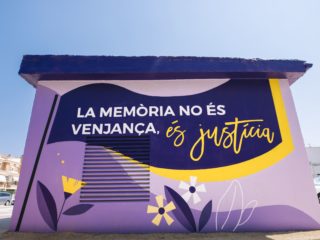