During the first weeks of July we carried out a project of urban art and historical memory in Malgrat de Mar in the framework of the Julio Joven organized by the City Council of Malgrat de Mar. We had the participation of eleven young people from the town, the artists Miquel Wert and Núria Toll and the local historian Sònia Garangou.

From the development of a creative process using the main techniques of urban art, we made visible among young people the figure and legacy of a relevant person in contemporary history: Neus Català. From the provision of tools for critical reflection, including urban art, we wanted to raise awareness of this character and pay tribute to her in the form of a mural. From several participatory sessions, the young people designed and executed a mural in an electrical booth working on the values of cooperation, teamwork, proactivity, respect and civic-mindedness while developing artistic creativity and reflection through a new expressive medium: muralism. Throughout the whole process, they were accompanied by Núria Toll, an urban artist who guided and helped them to create their own work.

The project had several phases. The first consisted of a dynamic and participatory session at the civic center. There, the historian Sònia Garangou made a contextualization and awareness of the relevance of Neus Català and the artists Miquel Wert and Núria Toll made a brief presentation about her career, her creative process and the importance of having collective spaces for social communication. Subsequently, different dynamics were carried out where the young people were able to determine the concepts, elements, colors and messages to develop a joint design of the mural.

The second phase consisted of the mural execution of the designs resulting from the previous session. During two days, the eleven young people, together with Núria and part of the Rebobinart team, dedicated many hours and energy to transform the electrical booth from a neutral element into a space with a clear and transforming message.

Headed in violet in reference to the feminist struggle that Neus Català championed, each face of the little house contained different key elements that Núria and the young people considered relevant and worthy of being captured on the walls. A quote from Neus Català: “Memory is not revenge, it is justice”, a portrait, some clenched fists and above mentioning resistance, black crows that are a reference to the concentration camp where Neus Català was (Revensbrück means crows in German), flowers that express vitality and broken chains to symbolize freedom are some of the elements that star in the mural.

The mural is in dialogue with a wall mural also intervened during the month of July by the artist Miquel Wert, located in the same street. The mural is dedicated to Neus Català and is the result of the first phase of the project. 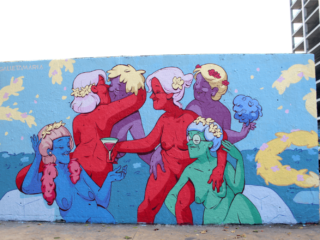 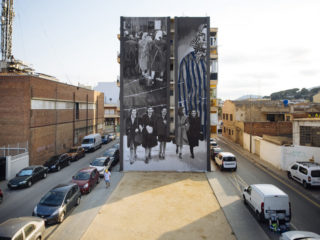