The Barcelona City Council’s Pla de Barris, Rebobinart and the international artist Javirroyo worked together at the start of the Christmas campaign to paint the shops in the Carmel and Can Baró neighbourhoods of Barcelona with messages in favour of local commerce.

Up to 27 commercial premises have voluntarily given up their 40 shutters to call on citizens to consume in the neighbourhood during the campaign, appealing to the continuity of the businesses and the social network of the Horta-Guinardó district. “Consume here so that I can continue to open this shutter” is the guiding phrase that encompasses the messages that Javirroyo has used to make the neighbourhood reflect through his well-known cartoons, such as the metaphor of the iceberg and the dialogue between a father and a son.

The initiative, promoted by the Horta-Guinardó District and the Pla de Barris, was carried out on a Saturday night as if it were an act of vandalism so that the neighbourhoods would wake up on Sunday with the impact of finding all these blinds in compact colours with slogans in favour of local commerce.

Javirroyo is an illustrator and graphic designer originally from Zaragoza and based in Barcelona. He runs his own studio, Chispum, since 2007. He is also the founder of the vinyl publishing house Chispum and the online graphic humour weekly L’Estafador, where he is the editor, and collaborates with El País, El Semanal, Cuarto Poder, La maleta de Portbou and Visual. He has published several books and comics such as Homo Machus, (2020); Life is Sho (2018) and La Cebolla Asesina Sexo, mentiras y armas de destrucción masiva (2009), among others. In recent years he has begun to experiment with muralism with Rebobinart and has already been the protagonist of projects such as Art al TRAM y la última JAM ‘All borders are in your head’ about migration.

Video of the artistic intervention 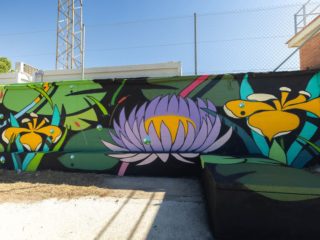 Next Project (n) WATERWALL BY EKOSAURIO