During the months of lockdown, Montana Colors and Pintuco Foundation devised a series of online events. Several urban artists and cultural managers from Colombia, Spain, and other parts of the world participated in these.

The first open forum was held in July, the second in August, and the third in September. Throughout these meetings, the participants shared a series of experiences lived in various urban art and mural projects. There was also a debate on various aspects related to urban art, such as the use of public spaces or artistic expressions.

Rebobinart had the opportunity to participate in the second forum, which was held on August the 6th and was moderated by the founder of Pintuco, Wilmar Andrés Martínez Valencia. Marc García, director of Rebobinart, participated as a speaker along with the artist Núria Toll. Throughout the day, they were able to share their experiences reflecting upon different topics: the role of public institutions in urban projects, the management and decomcratisation of public spaces and what is the role of women in the current art scene.

In this presentation entitled “Rompiendo muros en el arte urbano” they also deepened on the history of urban art in the city of Barcelona, its transition, and the urban and regulatory similarities between the city of Medellín and Barcelona. 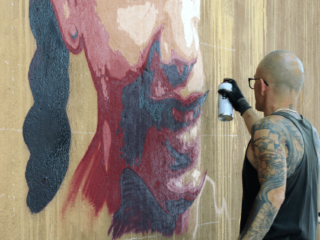 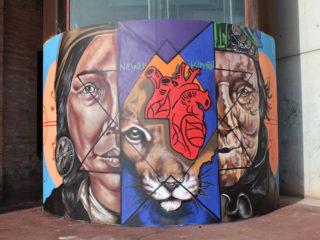