On the 11th of May, Fabra i Coats Creation Factory hosted the Community Arts Festival (FAACCC), a meeting space that offered various activities, from round tables, talks, assemblies and presentations with the aim of rethinking issues, such as: what do social problems mean, who we cause them, who we are the vulnerable, who we are the community and how we relate to them.

From Rebobinart we had the opportunity to participate in the round table How to incorporate territories and empower groups?, presenting the Womart project, which aims to vindicate the need to recognize and make visible female talent in the visual arts and to promote gender equality in all visual arts disciplines.

We shared a table with Alfredo Cohen (Associació Cultural elParlante) who presented Ciutat Esperança, an educational communication project that promotes critical thinking and debate, reflecting on the different realities of the Ciutat Meridiana neighborhood.

Diego Salazar (Connectats Cooperativa) also took part. En Palabras [relatos migrantes] is a collective project for the creation and literary edition that brings together migrants and refugees from Latin America living in Barcelona.

The debate focused on how each of the three projects works to empower the group that occupies them, through what tools and actions we make them visible or what has been the evolution of these from the beginning until today. Although these are three projects that are based on very different areas and groups of people, it was encouraging to see the points in common and how the ways to solve problems approached the three tasks.

From Rebobinart, we want to thank FAACCC for the opportunity to introduce Womart to a new audience. 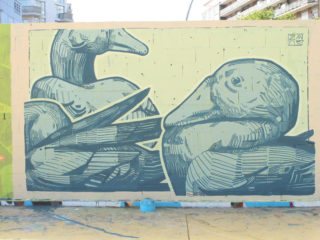