On March 9 and 10 we celebrated, on the occasion of International Women’s Day, the third edition of the project framed within the Wallspot platform and produced by Rebobinart: Wall Claim at Centre Cultural la Farinera del Clot. Wall Claim is an artistic programme promoted by Wallspot that consists of inviting different artists who are part of the platform to paint the exterior wall of this center under a theme linked to the International Days established by the ONU. This time, we have had the collaboration of the artist Killa EK. Killa, who grew up in the city of Quito (Ecuador) and is specializing in drawing, design, and painting, has been making a protest mural to the exterior mural of the center.

The artist’s mural, which will be on the outer wall of the center for 3 months, has been focused on the Venuses of Valdivia (Ecuador Coast), paleolithic figures that represent the idealization of the female body and fertility. Through this conceptual line, Killa EK has turned it around and has represented 5 women with different bodies claiming diversity and questioning the social normativity that surrounds bodies.

In addition, on Wednesday 10, the action culminated with the talk “La Capucha como Aliada”, given by the Las Migras de Abya Yala, a collective composed by four multidisciplinary Latin American artists: Jahel Guerra Roa, Lorena Alvarez Chávez, Daniela Efímera and La same Killa.ek. During the talk, the four components presented their framework of action from the community and the priests, always using the “hood” as an element of feminist struggle in public spaces.

The event has demonstrated, once again, the need to dignify and make visible the work of women within the urban art sector, a sphere that is still stigmatized and masculinized.

We want to thank, once again, the collaboration of  Montana Colors, Montó Pinturas, CJ La Traca, CC La Farinera, and Districte Sant Martí for helping us to run This event. 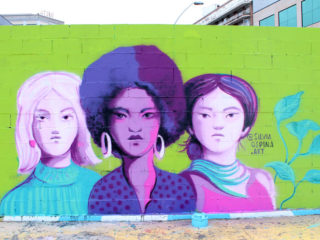 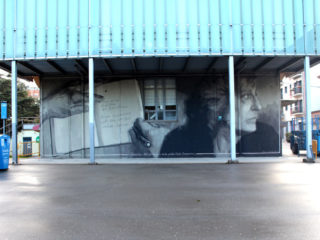 Next Project (n) Mural for Marta Pessarrodona by Elisa Capdevila