From March 15th to 21st, the artist Elisa Capdevila performed an artistic mural at Casa de Cultura de Sant Cugat del Vallès on the occasion of the 80th birthday of the poet and writer Marta Pessarrodona. The project, promoted by the Sant Cugat City Council and produced by Esfera 72 and Rebobinart, aims to commemorate the work of one of the key figures in Catalan poetry of the last century.

Marta Pessarrodona y Artigas, one of the most recognized intellectuals of Catalan culture, defines herself as a poet even though she has also moved through the fields of essays, narration, translation or literary criticism, among others. Her work has not only articulated a constant and revealing dialogue between Catalan and European poetry and literature, but it has also represented a literary look at exile caused by the Civil War, with a focus on the figure of women. For more than 20 years, the poet has lived in Sant Cugat and actively participated in the literary life of the city. For this reason, the City Council has decided to recognize her career and  figure in one of the most representative cultural facilities of the city.

Through her realistic style, Elisa Capdevila has captured a mural that becomes a visual collage that merges the portrait of the poet, made by the photographer Leopoldo Pomés, and the hands of Pessarrodona writing a passage from one of her poems. Precisely, the artist has wanted to juxtapose the face of the poet with her hands and calligraphy, these two being a personified and poetic representation of the vehicle that allows her poems to come to light.

The mural, which has been very well received by the public, was inaugurated last Sunday March 21st in an event accompanied by Marta Pessarrodona, who highlighted the great reception that the city of Sant Cugat has always had with her, and Elisa Capdevila, who explained her artistic proposal and the relationship with the work and life of the poet. 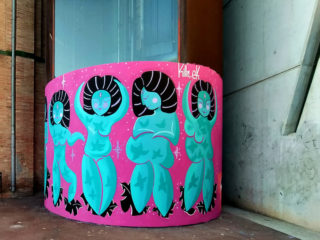 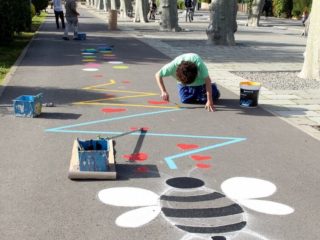