Last Sunday, March 6th, the Dutch artist Thijs Lansbergen, winner of the last Wallspot Travel the Wall call, traveled to Barcelona to paint one of the Wallspot walls in the city, located in Drassanes.

This was the first exchange to take place in the city for more than two years due to the pandemic and closed a circle, since previously the artist Maga, a reference in the city, painted one of the walls of the city of Thjis, in Rotterdam. So Thijs, an artist who has been working as an illustrator for more than 10 years, took on the challenge of leaving the studio and painting one of Barcelona’s walls with his easily recognizable style, inspired by the silkscreen technique: schematic 2D characters and shapes, robust but with movement and using a reduced palette of bright colors.

On the other hand, one of the biggest challenges for Thijs on this occasion was that it was his first mural outside of Rotterdam, using spray paint and against the clock, given that he only had one day to do it. This seemed to be an encouragement for the artist as he met and exceeded expectations, resulting in a mural full of energy and color that converses with the public space around him.

From Rebobinart and Wallspot we reaffirm the need to generate these exchanges to enrich the city and society, as well as to establish solid networks between artists of different nationalities 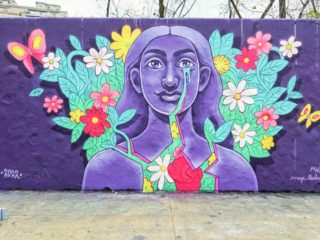 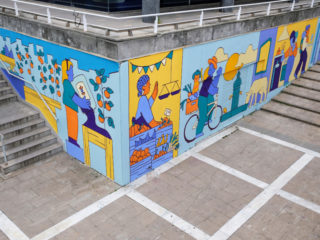