The Consell Assessor de la Gent Gran de Barcelona is the Ajuntament de Barcelona participatory space for all the issues related to the elder of the city.

This year it’s the counsel’s 30th birthday, and to thank all its members and to commemorate all the tasks that have been done so far, they have been rewarded with a mural intervention that represents them.

Elisa Capdevila and Miquel Wert have overseen making this tribute in mural format. The artists have participated in diverse sessions in which they have met the members of the council and have found which ideas these members wanted to be represented in the mural.

Capdevila and Wert have joined their styles to create a triptych kind of work, which reclaims the tasks done by this participation body. Some of the issues that the piece poetically treats are the defense of equality, the fight against elder people’s isolation, the collective advance to a congenial city, and healthy and active aging.

The 4th of October, the International Day for the Elder, was the mural presentation act. Current members of the council, the artists and the Councilor for Children, Youth, the Elderly and People with Disabilities, Joan Ramon Riera, and the Vice President of the Advisory Council for the Elderly, Juan Martínez León, among others assisted to the event. The presentation climax was the explanation of all the creative processes, and it ended with a visit to the artwork. 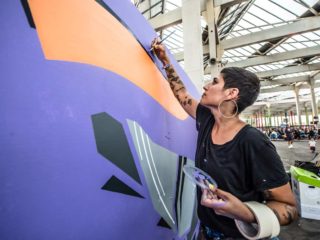