The City of Madrid made available two new public walls for the community gathering around graffiti. Both walls are freely accessible for artistic interventions. The project is led by the department of Public Art of the City in collaboration with Rebobinart and the Districts of Moratalaz and Puente de Vallecas.

Rebobinart has been in charge of organising and producing the opening of these spaces with the presence of local artists. The first intervention took place on November 14th in a grey concrete wall of 163 metres wide and two metres high at 30, Doctor García Tapia avenue, in the neighborhood of Media Legua (District of Moratalaz).

The second launch was a week later, on the walls of José Paulete, under the bridge meeting Buenos Aires avenue, in Puente de Vallecas. Both sides of the tunnel are about 100 metres wide in total and 5 metres high, giving the possibility of painting big, high murals.

Both inaugurations relied on their respective open calls upon which Wallspot selected six artists to intervene in both walls. The artists selected were given 10 sprays each. The calls were launched in collaboration with Montana Shop Madrid and Writers Madrid, who had the opportunity to invite a wide group of artists from their networks to paint in both spaces.

During the rainy launching day in Moratalaz, 25 interventions were laid out in the wall, making it the starting of a new permanently available canvas for the urban artists in town. Works by Ele Zissou, Elisabeth Karin, Shara Limone, Erre Gálvez and the NSN crew shone there for several days together with those from writers like ONCPS, Dulze, Anaïs Máximo and Fustar  from Writers Madrid and Zeta1970, Son3k, Teki1 o Kans on Montana’s side, among many others.

The walls in both districts are freely available in Wallspot until mid January 2021 through this pilot project in collaboration with the municipal institutions in Madrid. From Rebobinart, we are very happy with the good reception of the project in the city and we expect to be able to support new initiatives that promote the presence of urban art.

With the support of Ayuntamiento de Madrid, Montana Colors and Writers Madrid. 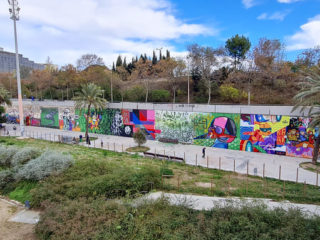