From December 5th to 7th, Block JAM was held in Barcelona. The event, organized and produced by Rebobinart, took place on the Wallspot wall ofLes Corts Skate Park, a space devoted to artistic interventions that was inaugurated six months ago.

The urban artist OWEN, was in charge of curating the Block JAM, an event that was organized with the aim of merging the old and the new school of Street Art. A total of 12 artists participated in the JAM, all of them renowned within the urban art world and who worked frantically to fill the walls with spectacular medium and large format murals.

Gemma Monostereo, Kram, Eledu, Dios, Edjinn, Slomo, Eos, Kamil and Owen were the guest artists; but during these days artists such as Penao, Guillem Font, Kader or Carlos Magone also contributed to this meaningful JAM and left their mark on this wall of more than 100 meters long.

From Rebobinart we invite you to visit this wall which still now hosts a combination of diverse artistic styles.

With the collaboration of  Montana Colors and L’Ajuntament de Barcelona. 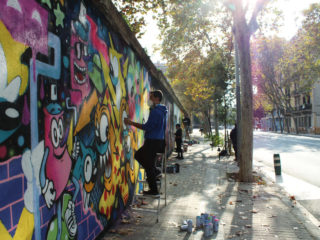 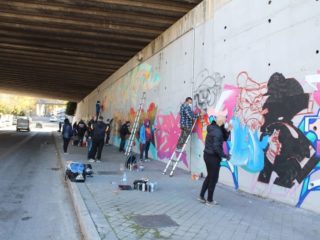