Wall Lab’s latest edition was held during the month of  June, and from Rebobinart we have been in charge of the production of this project.

Wall Lab is a Wallspot programme aimed at artistic experimentation in public spaces and the creation of long-lasting murals. The participating artists of this initiative are usually selected through an open call, but in this edition the selection has been made through a contest. During the lockdown period, Wallspot launched a contest via Instagram, open to all artists who are part of the platform. To participate, they had to submit a mural sketch along with the hashtag #WallspotEnCasa, and finally, from all the participants, Wallspot and Rebobinart selected three winning artists.

Elena González, better known as Ele.zissou, was one of the three winners, and therefore had the opportunity to participate in this very special edition of Wall Lab, managed by Rebobinart.

This artist, born in Salamanca, is an illustrator, graphic designer and photographer. Her style is characterized by the presence of small creatures that have led her to create a wild and magical universe. For this occasion, ele.zissou has painted a medium format wall named Stay Wild. The artwork is formed by a series of characters that depict tenderness but at the same time can generate a sense of concern or curiosity to the viewer, since their faces are neutral, making it more difficult for them to read their expression.

Rebobinart, in addition to being in charge of the project’s production, provided the participants with all the necessary materials to perform their artwork as well as an artistic fee and a video interview along with a photographic compilation to promote the work of these artists. 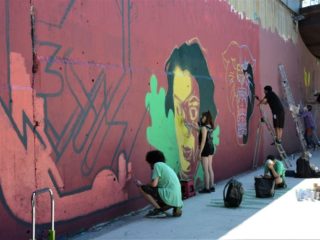 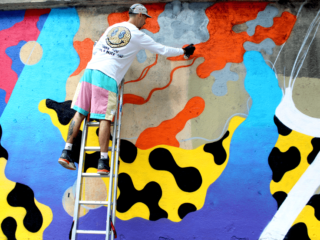