This December the urban artist Santiago Jaén has painted a mural in the facade of the school Joaquim Ruyra in Florida’s neighbourhood (L’Hospitalet de Llobregat, Barcelona).

With an abstract style, the intervention shows colourful shapes and textures integrated to the architecture of the space.This project has been produced by Rebobinart and is part of the council’s initiative to revitalise different areas of the neighbourhood through artistic interventions in the public space.

Mixing studio works and muralism, Santiago Jaén (also known in the graffiti world as Chan), has developed an abstract style influenced by the contemporary status of the world, the fluidity of improvisation and the visual effects of the colours. For this intervention, which can be seen from the street, the artist has created an artwork loyal to his personal style, adapting the shapes and textures to the space’s architecture and its context.

The City Council of L’Hospitalet de Llobregat has made a commitment to urban art from a social and professional perspective aiming to stimulate the cultural and artistic fabric. This mural, therefore, will be part of an enriching and varied composition of artistic interventions in the streets of the city and will bring art and culture closer to children and neighbours.

This intervention, which took place along one week, was the artist’s first mural in l’Hospitalet de Llobregat. The vibrant colours of the mural provide the school with a joyful vibe, thus revitalising an emblematic space in the area.

Santiago Jaén started in the world of graffiti in 1992, influenced by his older brother in the boom years of this artistic discipline. From that moment on, he’s been developing his talent, painting in all kinds of surfaces in different cities of Europe and South America while participating in worldwide festivals such as Kosmopolite or Meeting of Styles, among others. In 2008, he became part of Badnic, one of the pioneering groups of the graffiti scene in New York. Through his abstract style, his artworks show curved shapes which convey deepness, balance, movement and calm. 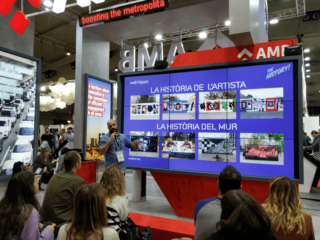 Next Project (n) Mural for the elderly by Elisa Capdevila