This project aims to streghten the comercial area of Sants-Les Corts through an innovative artistic action in the shutters of the local commerce. Through the artistic intervention of 24 commercial shutters on Galileu and Vallespir streets in Barcelona, it has been possible to establish a focus of attraction around the various points of trade articulated under a unified and coherent aesthetic. This aesthetic revitalisation of the establishments goes beyond the simple decoration of the shutters as it not only pursues the beautification of the businesses, but also, and more importantly, to provide a new communication platform to the commercial area of the Sants-Les Corts in order to stimulate it and strengthen its presence in the locality.

The artistic action is raised under the concept of patronage as a tribute to traders and their role in the artistic outcrop of the Renaissance, which allowed artists such as Botticelli, Leonardo da Vinci, Donatello and Masaccio to emerge in the cultural landscape of the moment. Jalón de Aquiles and Lucie Blin were the artists in charge to unify classic art and urban art and depict it to the comercial shutters. 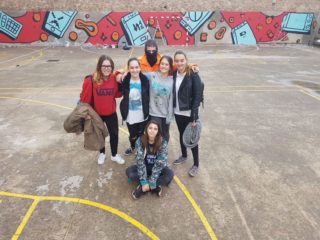