WOMART by OVNI and Nuria Toll

In October, women that live in Trinitat Vella together with the artists Núria Toll and Ovni have participated in the Womart project.

The implementation of Womart in Trinitat Vella consists of the creation of a community project where, through work with the neighbors, different spaces are transformed through artistic intervention. This project aims to empower women in the neighborhood so that, through mural art, they can transform it with their own hands, make it their own and regain full freedom of movement in their immediate environment.

The project has been divided into two phases, the first of which has been two participatory sessions with the neighbors and the artists. The aim of these sessions was to define the style of the mural, and the themes they wanted to capture. They have achieved this through a work of analysis of public space from a gender perspective. The result of this first phase has been the creation of a typeface, which they have used in the final mural.

The second phase, the realization of the mural took place between 4 and 11 October 2019. On October 6, the open session of mural creation was held as part of the festival El Charco, organized by the Maletas Viejas, where the neighbors actively painted, under the guidance of the artists, part of the design that had been created as a result of the previous participatory sessions.

This has been a participatory open action in which the neighbors of the neighborhood and both artists have collaborated. The intervention was carried out on various surfaces in Pare Manjón Street. The design of the mural incorporated the motto “Somos lo mismo”, on the front of the stairs, and “La Trini” on the side, with the typography that the participants had created during the participatory sessions. On the one hand, the design plays with geometry and perspective in the reading of these sentences, capturing the desire of the neighbors to generate a mural that encourages pedestrians to stop reading and think about their meaning beyond.

The need to intervene in Pare Manjón Street has arisen in response to the demand by the women residents to make the neighborhood a safer place for them. The result of this project has been very positive, as in addition to encouraging the participation of women in urban art, and making visible and recognizing their artistic talent, they have managed to transform Pare Manjón Street into a more welcoming place. passable for them. 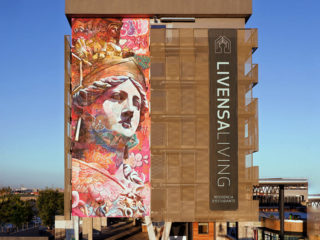 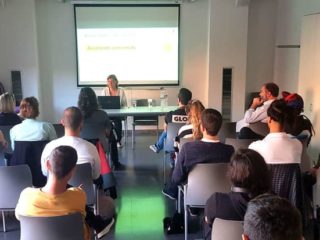